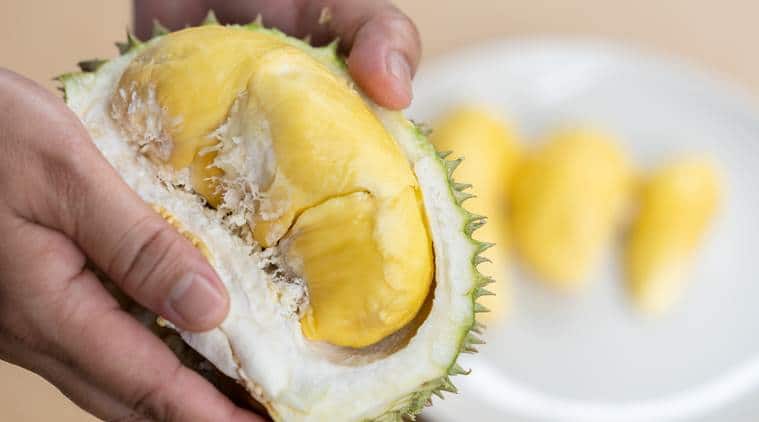 Have you tried this healthy fruit yet? (Source: Getty/Thinkstock)

While there are many different varieties of fruits available out there, nothing matches up to the durian fruit, which is a unique tropical fruit found in Southeast Asia. High in nutrients, it also has a bad reputation for smelling repugnant, so much so that in countries like Singapore, the subway network forbids you from carrying the fruit inside the train. Wondering what the fuss is all about? Here is everything you need to know.

As mentioned earlier, durian is popular in many Southeast Asian countries. It somewhat resembles the jackfruit because of its large size, colour and a spiky, hard outer shell. Inside, it has a yellowy flesh — with a custard-like texture — and large seeds. The flesh, however, is not always yellow, and can sometimes be red, white and even green. A fully grown durian fruit will have about two cups of edible pulpy content.

Those who consume it, use it in both sweet and savoury dishes. The pulp and seeds are both edible, but the latter needs to be cooked first. The fruit’s flavour can be described as cheesy, with a hint of almond, garlic and caramel; puzzled much?

If you decide to try the fruit, there are a variety of ways, including consuming it in the juice form, eating the seeds, having it as a soup, a side dish, or even as a dessert. It is believed that some of its medicinal properties have also been studied over the years.

Durian is often hailed as the most nutritious of fruits. It has everything, from carbs, fat, calories, protein, vitamin C, manganese, vitamin B6, potassium, magnesium, among others. It is also rich in many plant-based compounds which function as antioxidants.

Traditional Malaysian medicine is believed to have used all parts of the durian plant — its leaves, roots, the fruit itself — for the treatment of jaundice, fever, skin conditions, etc.

In fact, some studies show that being rich in antioxidants, durian can fight off cancer-causing free radicals, prevent the occurrence of heart diseases by reducing cholesterol, and fight many bacterial infections.

Use a knife to break open the shell, and to gently remove the flesh. Next, you can consume the pulp as is, or in the one of the many ways mentioned above.

What is with the smell?

While some people do not mind the smell, others abhor it. The smell can be described as a weird combination of the fruit, rotting onions, honey and sulfur.