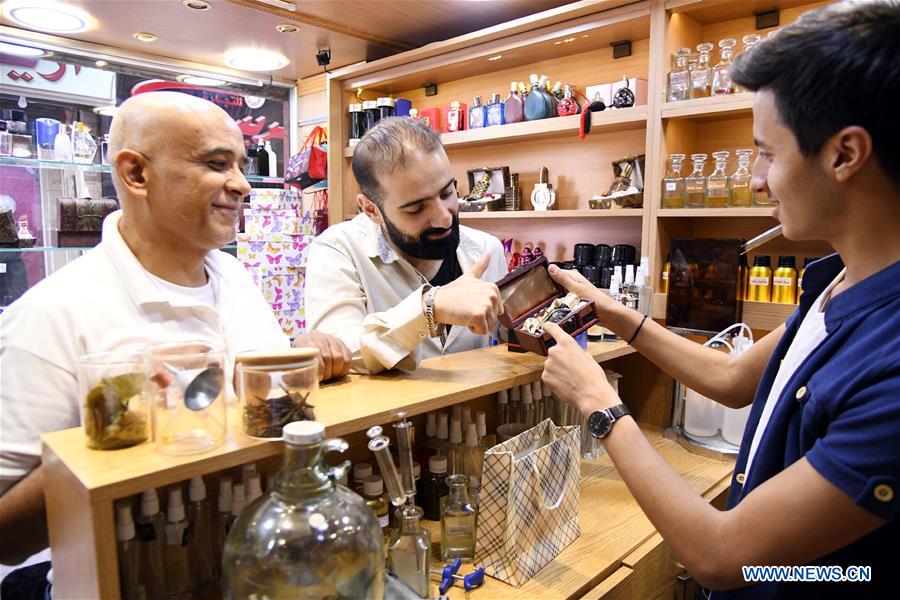 While most of the young people spent much of their youth thinking about fleeing the war in Syria, 20-year-old Anas Abbas found a sanctuary in a small shop in capital Damascus to make perfumes that helped him send his country’s famous fragrances to the world.

In a small shop in Damascus’ famous al-Hamra street, Abbas composes perfumes to his customers, many of whom seek his advice about what cologne they should wear for certain occasions because he earned their trust.

He looks like any average young man of his age, tall with a slim built and a carefully-made hairstyle that he checks every now and then to make sure he looks the best way possible.

During the worst time of the Syrian war and as many of the young men were setting plans to leave, Abbas was busy with something different from his peers.

He was busy studying perfumes and making experiments to come up with a formula that can change his life to the best while he is still in his country.

Abbas has managed to put the spirit of Damascus’ renowned jasmine fragrance in bottles and send it abroad to tell the world that there are beautiful things in Syria left untold.

Such untold stories are about people like Abbas, who put their hearts in things they love to have their country’s name mentioned in beautiful and peaceful platforms, not only in heartbreaking headlines.

The young man inherited the love of making perfumes from his father, who has been working in this field for over 25 years.

Abbas himself started doing perfumes in 2014 and he has been able to make massive achievements just because he is passionate about what he is doing.

His initial dream was to graduate from the media faculty in Damascus and become a famous reporter. However, he had a small twist of fate when his father suggested he should learn to make perfumes as well.

Abbas was smart enough to master the perfume making and employ his media study to market himself as well as his perfume products not only inside Syria but abroad.

He said his father’s advice has earned him the fame he was longing for and even more, as he has truly fallen in love with the perfume-making to the point that he is now referred to as a perfume expert who appears on TVs and makes exclusive fragrances to celebrities.

But of all the fragrances he has made, there was one fragrance only that he loved the most and was the one that earned him fame in such a small age.

“The first perfume I made was a year and a half ago and was called Damascus is Home of Jasmine. I produced it to someone out of Syria because the Syrians abroad love the scent of Jasmine to remember their country,” he said as the Damascene jasmine is famous and ever Damascus is locally known as the capital of jasmine.

His perfume is not only a regular Jasmine fragrance that could be found in any perfume shop, but it’s also so unique that the perfume changes scent every few minutes.

This strange combination and unique idea pushed one of his friends to advise him to register his perfume in the Guinness World Records.

“I didn’t expect it to make the cut, but, anyway, I applied and forgot about it until one time I received a phone call that my fragrance had been accepted and entered Guinness World Records as the perfume that changes scent every few minutes,” he said.

He said his knowledge in the fragrance concentrations and his passion enabled him to compose the fragrance, which shifts aroma from jasmine to coconut, vanilla, and oud.

“The perfume is made from the scent of our country from jasmine so this is why I was encouraged to do it because jasmine’s fragrance is incomparable with other fragrances,” he said.

Abbas has employed the social media platforms to be his window to the outer world at a time all people could hear about from Syria is the news of a devastating war.

He told Xinhua that through social media he was able to make online programs, speaking about perfume making and providing people with scientific information about the reaction of fragrances on different types of skins and what perfume is more suitable for each time of the year.

His online followers grew in number and he reached to the point where celebrities from Syria and neighboring countries started asking him to make them exclusive perfumes.

Now, he said he has huge demands to export his perfume to Arab countries.

However, Abbas said there is a challenge in making perfumes now that the country is under economic siege, noting that there are specific types of essential oils that are needed to be imported in Syria like the sandalwood essential oil or the cinnamon oil or the coconut oil that Syria doesn’t produce.

“The prices of the imported essential oil were so expensive and there was no easy way to getting them,” he said.

Speaking about the time when he was feeling down, he said his dream of becoming a famous perfume maker hasn’t faded not for one day despite the war and the tough times the country had gone through.

“Frankly, the war has affected all Syrians not only me, but I have tried to avoid the negativity by focusing on my study and follow this hobby of making perfumes. I used to return to the shop after school because I love this job,” he said.